I love taking trains!  Maybe not as much as Sheldon (BBT reference), but I still think it’s such a fun way to travel.  Luckily Switzerland seems to share my option.  The train system in the country is fantastic!  After deciding to take a last minute day trip to Lucerne,  we booked some super saver tickets.  You can only book these on the app or online so it’s a good idea to check there first.  Unlike normal tickets, you’re locked in to a specific train but get a really good deal.  You can find more information on the SBB website.

We planned our arrival so we could meet a 10am walking tour… or so we thought.  When we arrived, almost everyone getting off the trains was in costume.  It turns out that it was a Carnival day!  Unfortunately, this meant the tour didn’t end up happening so after waiting a little while at the meeting spot, we wandered over to the tourist information booth.  The woman there was very helpful and it turns out they have a “self guided” walking tour map.  So armed with the new booklets, we took the self guided walking tour around the city, seeing the bridges, the dam, a few churches, and the Lion of Lucerne, which is a monument to Swiss Guards who were massacred in 1792 during the French Revolution. 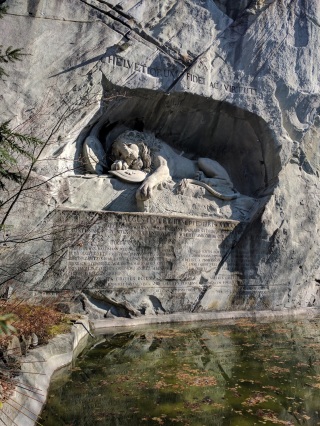 View from the Chapel Bridge 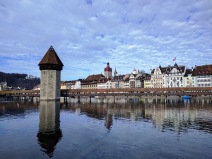 views of Mount Pilatus across the lake

The surprising thing was that Lucerne was a lot smaller than I thought it would be so it only took less than 2 hours to complete.  This left us plenty of time to enjoy the carnival festivities.  We grabbed a quick lunch and then staked out a spot for the parade!  While we were walking around town, we saw many bands performing individually, which made the atmosphere in the city loud and lively!  Every band had a different costume theme.  And these weren’t just simple costumes, they looked like they had taken months to craft.  The intricacy and detail that was involved made me think that these were multiple year costumes.  Either that, or everyone in Switzerland is very crafty!  I especially liked the snowmen costumes, which I sadly don’t have a picture of. 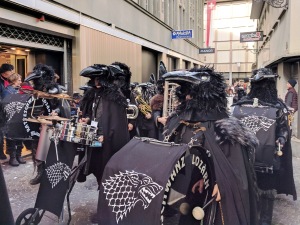 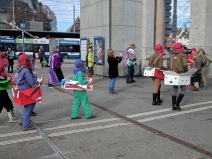 After about an hour or so of watching the parade go by, we decided to wander up the parade route, against the flow of traffic.  There were still a few bands playing that weren’t in the parade proper and we saw one float with a southern flag (which was a little weird) and then we picked up some more wine and walked along the old city wall.  The views went very well with the wine.

We booked out tickets back on the app and started to make our way towards the train station.  We grabbed another snack from Tibits (it’s a chain in Switzerland) and ended up watched a band playing in the train station lobby.  There was a large group of people watching and it made for good entertainment until it was time to catch our train back to Zurich for the evening. I’m sure our experience in Lucerne was not a typical one, but the city itself it beautiful and worth at least a few hours if you’re in the area.